The state of Gujarat is situated on the far western shores of India. It is known to the local people as the jewel of the west and if we take into account the mouth-watering cuisine that Gujarat is famous for, it certainly lives up to its reputation as a shining diamond in India’s culinary crown. In fact, you will see the influences of Gujarati food on many of the menus of London’s best Indian fine dining restaurants.

Due to the strong religious influences of Jainism and Hinduism, it is vegetarian cuisine that is most prevalent throughout this western state. Staples of the Gujarati home kitchen include thick, wheat rotis; the lentil and rice preparation, khichdi; expertly spiced vegetable dishes; and inventive, vegetable curries. However, there’s no predicting when hunger might strike when you’re out of the house and in this situation, Gujarati cuisine offers up a number of tasty snacks, ideal for fuelling you up when on the move.

Known as farsan, this term collectively describes the sides that accompany a Gujarati main meal – sides that also make a tasty snack. Although some of the more popular specimens are fried, others can be steamed or served up fresh – much better for the waistline! 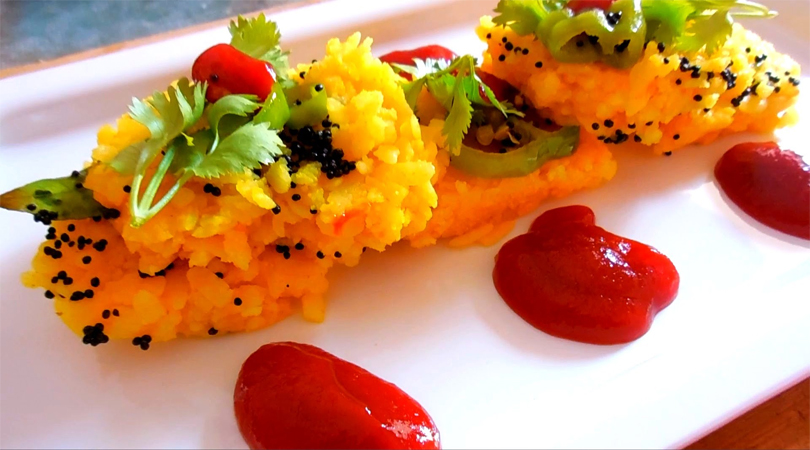 One of the most popular snacks that a hungry visitor might encounter in Gujarat is known as khaman. Shaped in little, bite-szied cubes and attractively decorated with a sprinking of sesame seeds, grated coconut and fresh coriander, khaman are usually picked up in India from small shops that specialise in farsan. Although traditionally these little treats were served in a kesuda leaf, it is more likely these days that your snacks will be tied up in newspaper. Perhaps paper-wrapped farsan are the Indian version of fish and chips?

Khaman is created from chana dal, ground into powder and blended with gram flour before being left for a night to soak. The batter is boiled before colourful turmeric is added to give it a golden appearance. Seasoning, baking soda, chopped chillies and ginger are added to taste. Sweet versions of khaman are also possible with the addition of sugar to the boiling batter.

The different forms of khaman

There are several variations to the khaman recipe with slightly different forms of the snack taking preference in different parts of the state. Nylon khaman is a favourite in the north with a softer texture than the original recipe. Masala khaman packs an added punch of spice with the addition of red chilli powder, giving the normally yellow colouring a reddish tint. Another popular version is sev khaman which involves mashing the mixture and garnishing with sev (vermicelli pieces) to create a texture with a little bit of crunch.

Dhokla is a Gujarat snack that often sits side by side with khaman. They are similar looking snacks, however the taste and texture is quite different. Dhokla utilises a spiced and fermented rice and chickpea preparation which is then steamed, chopped and fried in hot oil with various seeds and spices for flavour. The resulting snack is of a harder consistency and a paler colour to khaman. Both can be found at the farsan shop and both are delicious when served with an assortment of pickles or chutneys.

With the farsan of Gujarat, you’re guaranteed to keep hunger locked up ’til lunch. Visit for More Information: http://www.fineindianrestaurants.com/